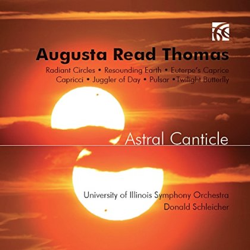 This work is available on
ASTRAL CANTICLE

Astral Canticle for solo flute, solo violin, and orchestra was commissioned by the Chicago Symphony Orchestra and premiered with Daniel Barenboim conducting on June 1,2,3, 2006 in Chicago, Illinois.

The title is derived from Astral — connected with the stars; and Canticle — denoting a song or chant.

A graceful chant-like canticle, played extremely quietly by the two soloists with very little vibrato, opens the composition.  Certain "hidden" members of the orchestra (hidden but on stage) hold the resonance of this calm chant, thereby slowly implying warm harmonies.   The canticle weaves its way through the entire composition in one variation or another. The first variation is led by the orchestra, which, after about 90 seconds, responds to the delicate opening in a majestic, fanfare-like manner.  The virtuosic soloists play back to the orchestra what they just heard, which results in a very demanding passage for the violin soloist.  The two worlds (chant-like and radiant-fanfare) that have been established evolve, interconnect, and influence each other.

As the entire work is derived from the opening materials, a very integrated sound palette exists, yet at the same time, there are many different characters of music, and spirits, that unfold such that the 20-minute work contains several sections that are of varying personality.  For instance, the middle of the work is akin to a slow movement and the end of the work is akin to a rhythmic and driving finale, but simple movement demarcations are not easily applicable as the music's flow is fluid and interconnected from section to section.  In the final 1/3 of the piece, there is a rhythmic, punchy dance-like passage in 10/8 meter (3+2+2+3) which transforms into a driving, metrical, and playful passage which is led by double bass pizzicati; all of this is reminiscent of Igor Stravinsky crossed with Charles Mingus.

It is a great pleasure to compose for Mathieu and Robert. Each and every player of the CSO is a world-class virtuoso and I experience immense joy when composing for these two soloists and for this orchestra that I love.

Having attended a rehearsal and concert of every single subscription concert by the CSO for which I was in town (which must be 200 different subscription concerts) and for the hours and hours of music that have crossed my ears and heart, I am eternally grateful to the musicians. Drinking up their beautiful sounds is something for which I must express immense thanks! The genius of Daniel Barenboim is an inspiration to us all.  Maestro Barenboim has strengthened and encouraged my ever-continuing search for deeper musical understanding, sensitivity, and grace. Being your Mead Composer-in-Residence has meant everything to me.  Astral Canticle is dedicated to Daniel Barenboim and the Chicago Symphony Orchestra.

Astral Canticle was one of two finalists for the Pulitzer Prize for music composition in 2007.

Gently meditative and brazenly celebratory by turns, Astral Canticle, for flute, violin and orchestra, was the last work Thomas would write in her capacity as Mead Composer-in- Residence at the Chicago Symphony from 1997 to 2006, and it was premiered on June 1st 2006 by flutist Mathieu Dufour and violinist Robert Chen under Daniel Barenboim as part of his final concerts as that orchestra's Music Director. The work's two soloists are heard either on their own or otherwise only very lightly supported (with various parts of the orchestra acting as resonators to the solo roles), and their alternation with the more volatile, fanfaresque sections which originally showcased the Chicago Symphony's legendary brass section imparts the work a "call-and-response" quality, thereby investing the music with the hieratic majesty which is a familiar hallmark of Thomas' orchestral oeuvre. Only at the very end do soloists and orchestra sound together, and it is typical of Thomas' restlessly meticulous approach to scoring that she should take the trouble to add the following note for the soloists at this point: "You will be covered dynamically by orchestra for some of these seven measures. This is okay". By the same token, the music's harmonic environment is free-wheeling and kaleidoscopic, moving seamlessly from the open diatonicism of the chant-like solo lines at the opening through dissonances which are bracing without ever being abrasive. Such harmonic flexibility seems to embody Thomas' own words: "Old music deserves new music and new music needs old music."

From the Website of The Pulitzer Prizes "Pulitzer Prize 2007 for music composition awarded to "Sound Grammar" by Ornette Coleman, recording released September 12, 2006.

Also nominated as finalists in this category were: "Grendel" by Elliot Goldenthal, premiered June 8, 2006 by the Los Angeles Opera at the Dorothy Chandler Pavilion, libretto by Julie Taymor and J.D. McClatchy, and "Astral Canticle" by Augusta Read Thomas, premiered June 1, 2006 by the Chicago Symphony Orchestra (G. Schirmer, Inc.)."

"Music with death as its subject would appear an odd choice for inclusion in a farewell celebration. Actually, the conjunction of somber pieces by Mozart, Mahler and Wagner, all tied to questions of mortality, played to the strengths of Daniel Barenboim at Thursday's subscription concert by the Chicago Symphony Orchestra at Symphony Center.

"What made the concert even more rewarding was the inclusion of a world premiere, Astral Canticle, by Augusta Read Thomas, her farewell present to the orchestra she has tirelessly served as composer-in-residence for the last nine years. The piece, her sixth commission from the orchestra, stood out from the solemnity that surrounded it like star bursts against a pitch-black sky.

"Thomas has spent hundreds of hours with the Chicago Symphony and she knows its particular qualities inside and out. She designed Astral Canticle, in part, as a showcase for two of the finest principal players of the Barenboim era, flutist Mathieu Dufour and violinist Robert Chen, and the music she has tailor-made for each man is laced with palpable admiration.

"The concertante soloists open with prayerful, intertwining lines meant to evoke medieval plainchant. This simple, archaic-sounding music becomes the foundation of everything that follows. It soon gives way to a fusillade of fanfares driven by three trumpets, with the flute and violin acting as mediators in the evolving dialogue between the astral (radiant and energized) and canticle (lyrical and meditative) worlds.

"Astral Canticle is one of Thomas' more immediately accessible pieces, and there is something interesting taking place at any given moment. In the more extrovert sections, the bright clangor of metallic percussion encircles the orchestra as would the sun's corona. Each soloist has characteristically fluid material to play. The supercharged finale ("Igor Stravinsky crossed with Charles Mingus," Thomas calls it) brings eruptive walls of sound as only the Chicago brass can produce.

"The orchestra players gave their soloist-colleagues the warm applause they deserved, while the audience joined in to welcome them, Barenboim and the composer back to the stage several times. Certain details were fudged, balances weren't ideal and Barenboim's vocal obbligatos were sometimes distracting. But the strength of Thomas' new work was undeniable in this first performance. There's no doubt Astral Canticle will make its way through the orchestral world."

"Daniel Barenboim isn't the only longtime member of the Chicago Symphony Orchestra's musical staff leaving at the close of this season. Augusta Read Thomas, the CSO's vibrant composer-in-residence for the last nine seasons, also will be stepping down. On Thursday, Barenboim and the CSO gave the world premiere of Thomas' Astral Canticle, the last of five works she composed for the CSO beginning with the evocative "...words of the sea..." in 1996.

As composer-in-residence, Thomas has had an enormous effect on Chicago's classical music scene. She fought to create the CSO's contemporary chamber music series, MusicNOW. Established in 1998, it has grown from drawing audiences of 200 to a series that regularly attracts twice that many, sometimes hundreds more. Thomas' tastes are resolutely eclectic, and MusicNOW showcases a bracingly disparate range of composers.

Thomas also reviews the hundreds of scores sent by composers hoping for a CSO performance, passing on to Barenboim or principal guest conductor Pierre Boulez the ones that catch her ear. But local audiences know Thomas best for her open, ebullient personality, regularly on display during the pre-concert interviews that she often conducts but revealed more tellingly in her own music.

(She plans to remain in the Chicago area for the next year, but she is also leaving her teaching post at Northwestern University to devote herself to composition.)

The cosmos is a recurring preoccupation for Thomas, and during the 20-minute [Astral] Canticle, the orchestra's brilliant whirlwinds evoked the unpredictable flare and fade of shooting stars. But the piece is also a kind of farewell love letter to an orchestra Thomas has come to know intimately over the past nine years. Written for solo flute, solo violin and orchestra, it showcases both the technical virtuosity and intensely lyricism that concertmaster Robert Chen and principal flute Mathieu Dufour bring to their musicmaking.

"Astral Canticle is no mere platform for dueling virtuosos. The two solo voices were often intertwined, and frequently when Dufour picked up and extended Chen's song, it was difficult to hear exactly when the high, sweet-toned violin melody left off and Dufour's golden-toned line began. The main theme had a chantlike simplicity, and fragments of it made their way through the orchestra, appearing and disappearing like a wandering but benign ghostly spirit."

With soloists Mathieu DuFour and Robert Chen at the Chicago Symphony Orchestra's world premiere of Astral Canticle, in June 2006.