The Chicago Symphony Orchestra presented the world premiere of Thomas's Ceremonial on subscription concerts at Orchestra Hall on January 6, 7, and 8, 2000, with Daniel Barenboim conducting.

A new piece of music to launch a new century —that was the idea behind Ceremonial, the composition by Augusta Read Thomas that provided the first notes of music the Chicago Symphony played in 2000. At a time of many self-important millennium tributes, Ceremonial stood out as an unusually thoughtful and unassuming tribute to the timeless appeal of music and the joys of people gathering to make music together. For one thing, it was written by our own composer-in-residence and conceived with the musicians of the Chicago Symphony Orchestra in mind. It is, therefore, a personal response to the talents of these individuals —a special order, custom-made piece, rather than an anonymous public testimonial. And it was written with the "insider" knowledge of a composer who has spent hundreds of hours with this orchestra, on stage and off, since she was appointed here in 1997. "After two years," Thomas remarked at the time, "you get to know the people at the coffee machine, you hear them play chamber music, you listen to them rehearse, and you talk to them about music." More than a work to mark an occasion, Ceremonial is music for these people to play.

Ceremonial is an overture in all but name —a curtain-raiser on a new era. The work begins with a single clarinet playing the note A —a pun of sorts, since this is the same note that resounds throughout concert halls the world over as orchestras tune up. But Thomas's more significant intent was to start simply, modestly. For her, the year 2000 was not about "the whole universe changing their clocks. Really, a millennium is about individuals." As the piece progresses, the sense of the individual against the masses becomes more profound. When Thomas was asked to write music to mark the beginning of 2000, the first image that came to mind was a line by the Italian poet Quasimodo which she has loved for many years:

Each one stands alone on the heart of the earth pierced through by a ray of sunlight: and in no time it's evening.

The opening of Ceremonial makes music of this striking image. Thomas marks the clarinet solo with a quote from Saint Ambrose: "O brightness, bringing light from light." From that lone figure, the work proceeds as one big crescendo, but one that twists in upon itself, "like a wave gaining momentum, rather than a straight arrow." In the first part, the clarinet solo slowly "seduces" the rest of the orchestra, little by little —adding solo muted piccolo trumpet, then flute, oboe, and cello. Occasional throbs from the full orchestra interject, like a tiny heartbeat that continues to grow.

Then, suddenly, the piece starts over ("as if everyone were taking a breath together") with a new wave that builds to a furious climax. At the peak, part 2 begins, marked by a quotation, also from Saint Ambrose, "Let the trumpet of salvation sound." This is music of constant pulse and endless development (there is virtually no repetition of material) that never turns back. Into this, Thomas cuts "windows" —parenthetical comments that gradually take over as the music drives toward its conclusion.

Although the piece is optimistic —"it's about looking forward," Thomas notes —the ending is a kind of question. (Throughout her career, Thomas has been passionately interested in art that asks questions, not art that gives answers.) As she points out, Emily Dickinson often just put a dash at the end of her poems.

To purchase a sketch of Ceremonial, please visit the Online Store. 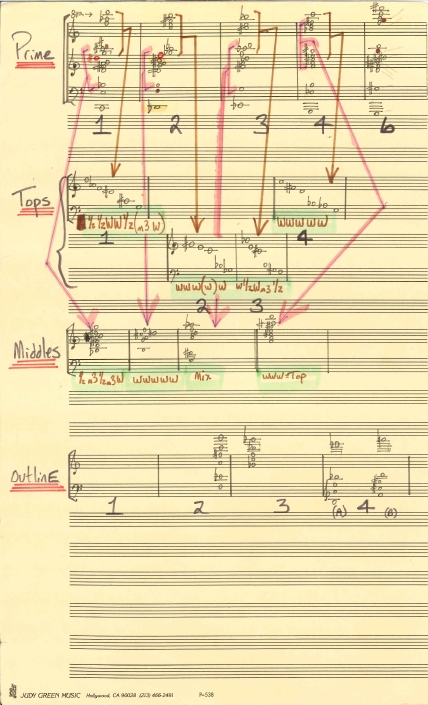 John von Rhein, Chicago Tribune "Thomas' typically clean craftmanship, her keen sense of unusual sonorities, her deep understanding of what her adopted orchestra can do — these virtues seized the mind [in Ceremonial]."