For soprano and orchestra 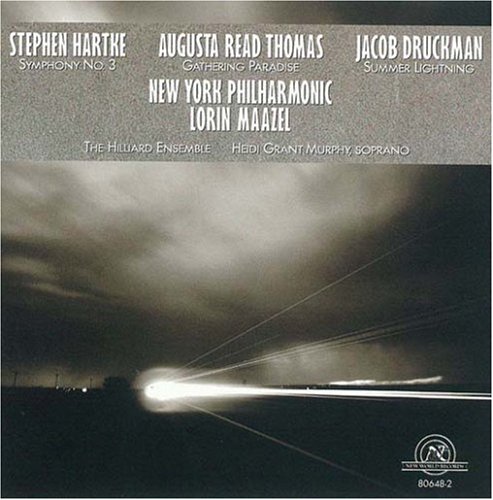 The gleam of an heroic Act
Such strange illumination
The Possible's slow fuse is lit
By the Imagination.

Emily Dickinson — How still the Bells in Steeples stand (1008)

How still the Bells in Steeples stand
Till swollen with the Sky
They leap upon their silver Feet
In frantic Melody!

It's like the Morning —
Best — when it's done —
And the Everlasting Clocks —
Chime — Noon!

The longest day that God appoints
Will finish with the sun.
Anguish can travel to its stake,
And then it must return.

Soft as the massacre of Suns
By Evening's Sabres slain

Image of Light, Adieu —
Thanks for the interview —
So long — so short —
Preceptor of the whole —
Coeval Cardinal —
Impart — Depart —

Thomas's compositions tend to be overt in their expression and unmistakable in the import they wish to convey. The critic John von Rhein was quite on target when he wrote in the Chicago Tribune, "Thomas' music, particularly her orchestral music, fairly explodes with an extroverted boldness of utterance audiences and musicians alike find challenging yet immediate. It's music that doesn't sound like anybody else's — music that insists you pay attention." The score of Gathering Paradise fairly teems with written exhortations such as "Heroic and bright," "Energized," "Enthusiastic and edgy," "Timeless, smooth and resonant," "Bold and passionate" — directives that are surely helpful to an interpreter but are also reflections of what is already embedded in the notes of the score.

Thomas deeply appreciates the poetry of Emily Dickinson (1830-1886). Most of Dickinson's poems are marked by first-person narrative, subtle metrical shifts, idiosyncratically generous capitalization, and unpredictable punctuation heavy in dashes (although some lack punctuation entirely); they are typically epigrammatic, deceptively simple observations whose insights flash with sudden, blinding clarity. "Much present in the poetry of Dickinson is the idea of the proximity of the Eternal in the here and now," Thomas remarks. "Like other visionaries she was not content to await Judgment Day for a glimpse of Paradise but, like William Blake, knew that it was visible if the doors of perception could be cleansed. She wrote in a poem: "Not 'Revelation' — 'tis — that waits, But our unfurnished eyes — ".

In the five connected sections of Gathering Paradise (which together run just short of 30 minutes), Thomas sets five of Dickinson's short poems in their entirety, sometimes repeating words or phrases and interpolating expostulations (for example, the ecstatic "ya's" and "ha's" in her setting of "How still the Bells..."). As one would expect of a composer of Thomas' symphonic bent, the orchestration, which employs a large instrumentarium, vividly mirrors and subtly underscores the text.

Thomas has cited two comments by Emily Dickinson that she feels are particularly apt in relation to these orchestral song settings:

"The soul should always stand ajar, ready to welcome the ecstatic experience."

If I feel physically as if the top of my head were taken off, I know that is poetry."

Program Note by the Composer

Composing for voice is my first passion in life, and as a result the largest part of my catalogue is music for voice: solo voice, small groups of voices, small or lage choirs, with and without orchestral or other kinds of accompaniments. For me, the human voice — possibly the most subtle, complex, and fragile yet forceful, flexible, seductive, and persuasive carrier of musical ideas and meanings — has always been an inspiration for and influence upon my entire musical thinking. I sing when I compose. I adore reading poems, and cherish the opportunity to set them to music; and I believe that text plus music (1+1) must equal at least 24. If 1+1=2, there is no need, for me, to set the text to music.

Emily Dickinson's poems are intensely personal, intellectual, introspective, and offer a meditation on life, death, and poetic creation; her poems share a close observation of nature as well as consideration of religious and philosophical issues. The poems used in Gathering Paradise are marked by the intimate recollection of inspirational moments which are suggestive of hope and the possibility of happiness found in art and in the observation of the natural world.

These poems are all about light. We start with "gleam," "illumination," "fuse is lit," and work through "the Everlasting Clocks — Chime — Noon" (when, in the middle of the composition, there is an actual kind of carillon sounding orchestration to represent a clock striking 12 times). Then, at the end of the work, "Soft as the massacre of Suns," and, finally, "image of Light, Adieu — ". So there is a kind of cyle of light, from sunrise to sundown...or perhaps a birth to a death, the final words of the composition being "Impart — Depart — ".

NEW YORK (AP) — The words "contemporary classical music" often glaze the eyes of the general public. That wouldn't be the case if more people heard the works of Augusta Read Thomas.

Soprano Heidi Grant Murphy was the soloist in this piece commissioned by the Philharmonic. Her voice poured into Avery Fisher Hall like molten gold, without ever sacrificing technical precision.

Thomas's half-hour work is set to 19th century poems by Emily Dickinson, whose spare, powerful lines were displayed on a screen above the stage. Gathering Paradise reflects a cycle of light taking the listener from sunrise to sunset — or birth to death — and ending with Dickinson's "Soft as the massacre of Suns," and finally, "Image of Light, Adieu—".

With the low-key but in-charge Lorin Maazel at the podium, the Philharmonic's strings created a lush blanket of sound supporting the soprano.

Thomas, a native of Glen Cove, N.Y., is at 40 among America's top composers. She has written boldly expressive, "listener friendly" works for orchestras from Berlin to Los Angeles, as well as a commission for conductor/cellist Mstislav Rostropovich. She is currently composer-in-residence with the Chicago Symphony Orchestra, which is to perform Gathering Paradise in February, also with Grant Murphy as soloist.

This is new music that commands attention, delivering its message with almost blinding clarity. The score is sprinkled with suggestions from the composer like "enthusiastic and edgy" or "timeless, smooth and resonant." The lyrics are steeped in Dickinson's palette of uncomfortable emotions and unpredictable rhythms that fit the 21st century better than the Romantic 19th.

To describe her work, Thomas cites the poet's comment that "the soul should always stand ajar, ready to welcome the ecstatic experience," and, "If I feel physically as if the top of my head were taken off, I know that is poetry."

"Like most major orchestras, the New York Philharmonic has a segment of subscribers who are at best wary of, and at worst hostile to, new music. One way to entice such listeners into giving a new work a chance is by placing it on a program with a sure-fire crowd pleaser. So Wednesday night's program, which will be repeated tonight, tomorrow and Tuesday, offered the hugely popular young virtuoso Lang Lang as soloist in the hugely popular Tchaikovsky Piano Concerto.

"But the news of the evening came after intermission with the premiere of a major work by Augusta Read Thomas, Gathering Paradise, settings of Emily Dickinson poems for soprano and orchestra, a Philharmonic commission.

"Though just 40, Ms. Thomas, who was born in Glen Cove, N.Y., on Long Island, has had works performed by major international orchestras and been championed by formidable conductors like Daniel Barenboim and Pierre Boulez. Before her new work, Ms. Thomas spoke to the audience at Avery Fisher Hall, and you could sense how helpful it was to get to know the composer, who was gracious and inviting, before hearing her work.

"That Ms. Thomas was so personable made a difference because her music, notwithstanding its alluring colors, striking orchestral effects and organic energy, is challenging. Her musical language is unabashedly atonal, though lulling diatonic elements leaven the astringent harmonies. Still, Ms. Thomas has an acute ear. When some eerie, atmospheric chord in quiet strings and winds lingers, you can almost hear her saying, "Just listen to that wonderful dissonance!"

"She selected seven Dickinson poems that touch on hope, the potential for happiness though art and the reassurance of natural phenomena in the world. She folds the poems into a continuous work of nearly 30 minutes. The music is scored for a large orchestra, and when the soloist is not singing, the orchestra really cuts loose with some turbulent, pummeling, angst-ridden outbursts, meant, it would seem, to match the sometimes disturbing mystery of Dickinson's writing.

"Still, the vocal lines, though often filled with leaps and skittish volleys, are mostly arching and lyrical. The work provided the soloist, Heidi Grant Murphy, with changes galore to let her sweet-toned, lyric soprano voice with its luminous high range shine forth.

"For me, the drawback came in Ms. Thomas's reading of the poems, some of which are Dickinson at her most verbally clipped and elusive. Rather than stand back and set the words, Ms. Thomas makes the vocal setting seem like a contributing element in an instrumental work, to the point where the vocal lines have instrumental effects (some scatting), word distortions (last becomes "la-aa-ast-ast") and sound illustrations (the buzzing of bees). And by boldly repeating Dickinson's phrases, she intentionally distorts the verbal rhythms: a radically short (two-line) poem becomes, in effect, a long poem.

"Still, you admired Ms. Thomas's strong conception, and it was hard to resist immersing yourself in her intelligent and technically impressive music. Lorin Maazel and the Philharmonic gave what seemed an excellent premiere performance, not just confidently executed but fully imagined. And Mr. Maazel followed Ms. Thomas's work with a blazing account of Bartok's Miraculous Mandarin Suite that made this score seem as modern as any premiere."

"The New York Philharmonic's first important concert of the season, with Lorin Maazel conducting, featured the world premiere of Augusta Read Thomas's Gathering Paradise — six Emily Dickinson settings for soprano (Heidi Grant Murphy) and orchestra that capture the restless fever of this poet's style in a way that few composers ever have. The 30-minute piece deals mainly in light images, suggesting a day-to-night journey in freshly minted orchestral colors and lyrical vocal lines that make the trip compulsively listenable."