For string orchestra (no double basses) 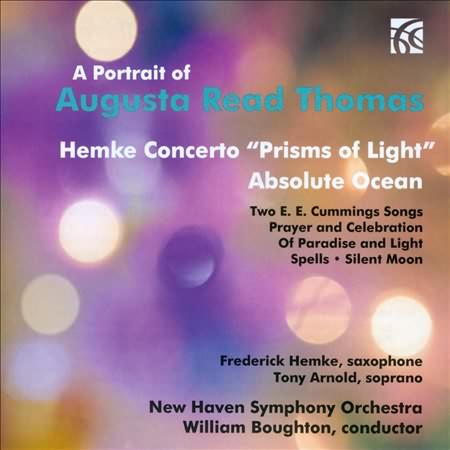 Of Paradise and Light performed by the All-Star Orchestra, conducted by Gerard Schwarz

A composer whose self-described "love affair with orchestra music" has spanned some 30 years, Augusta Read Thomas has received commissions by the world's leading ensembles, among them the Berlin Philharmonic, Cleveland Orchestra, Chicago Symphony, BBC Symphony and Los Angeles Philharmonic. In 2009, Ludovic Morlot led the Boston Symphony Orchestra in the world premiere of Helios Choros II, which was co-commissioned by the London Symphony Orchestra.

She was the Mead Composer in Residence with the Chicago Symphony Orchestra from 1997 to 2006, a residency that culminated with her Astral Canticle, one of two finalists for the Pulitzer Prize in Music. She was recently inducted into the American Academy of Arts and Letters. Read Thomas is a passionate and devoted teacher who served as the Wyatt Professor of Music at Northwestern University from 2001 to 2006, and continues to teach at the Tanglewood Music Center and in university and festival residencies across the United States and in Europe.

The work on tonight's program, Of Paradise and Light, is a world premiere orchestral transcription of Read Thomas' 2008 setting of e e cummings' poem, (kiss me), for girls' chorus. Thomas describes this new version as a work loosely in the tradition of Barber's Adagio for Strings: one which draws on the subtle and nuanced colors of the Orchestra's string sections to create a soulful work of reflection, "as though a sliver of paradise and light came down to shine upon a garden of colorful flowers."

"Of Paradise and Light" : Composer and Her Work )

"Along with his spectacular enhancement of performance standards, Gerard Schwarz's 26-year tenure as the Seattle Symphony's music director has been notable for his unwavering championship of contemporary American music. Nothing, then, could have been more appropriate than to mark his farewell season by commissioning new short pieces from 18 of the composers whose careers he has done so much to foster.

"The first result of this initiative, supported by philanthropists Agnes Gund and Charles Simonyi, surfaced on Wednesday. Augusta Read Thomas' Of Paradise and Light, arranged by the composer for string orchestra (without basses) from her 2008 setting of a poem by e.e. cummings, got the project off to a very satisfying start. About seven minutes long, this is music at once approachable in its basically tonal idiom and original in its freshly imagined orchestral textures, each string line independent, yet seemingly propelled and enlivened by its companions."