Co-commissioned by the Tanglewood Music Center in honor of its 75th Anniversary Season, with generous support from Deborah and Philip Edmundson; and by Miller Theatre at Columbia University; and by Third Coast Percussion with the generous support of Sidney K. Robinson.
First performance by Jack Quartet and Third Coast Percussion in Miller Theatre at Columbia University, 5 March 2015.
Second performance by Fellows at the Tanglewood Music Center in Ozawa Hall, 25 July 2015
Alternate version: It is possible to perform Selene with small string orchestra (instead of string quartet) and 4 percussion.
Another alternate version was arranged by Cliff Colnot: 4 percussion and 9 woodwinds (Piccolo, Alto Flute, Flute, Oboe, 2 clarinet, Bassoon, 2 Bass Clarinet. Note that the percussion parts are IDENTICAL to the original composition; the winds replace the string quartet of the original version.)
Duration: 18 minutes (see below for the option of a 14-minute version) 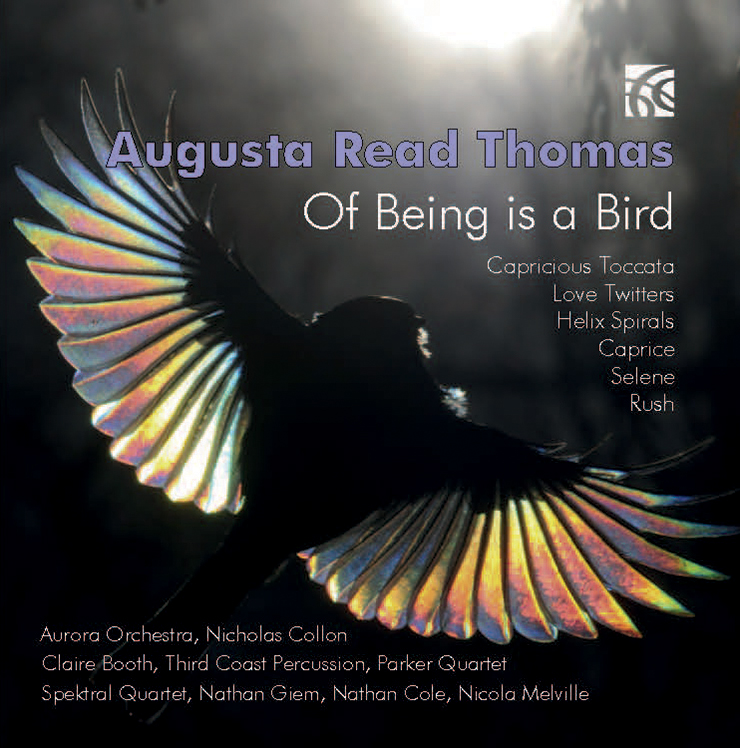 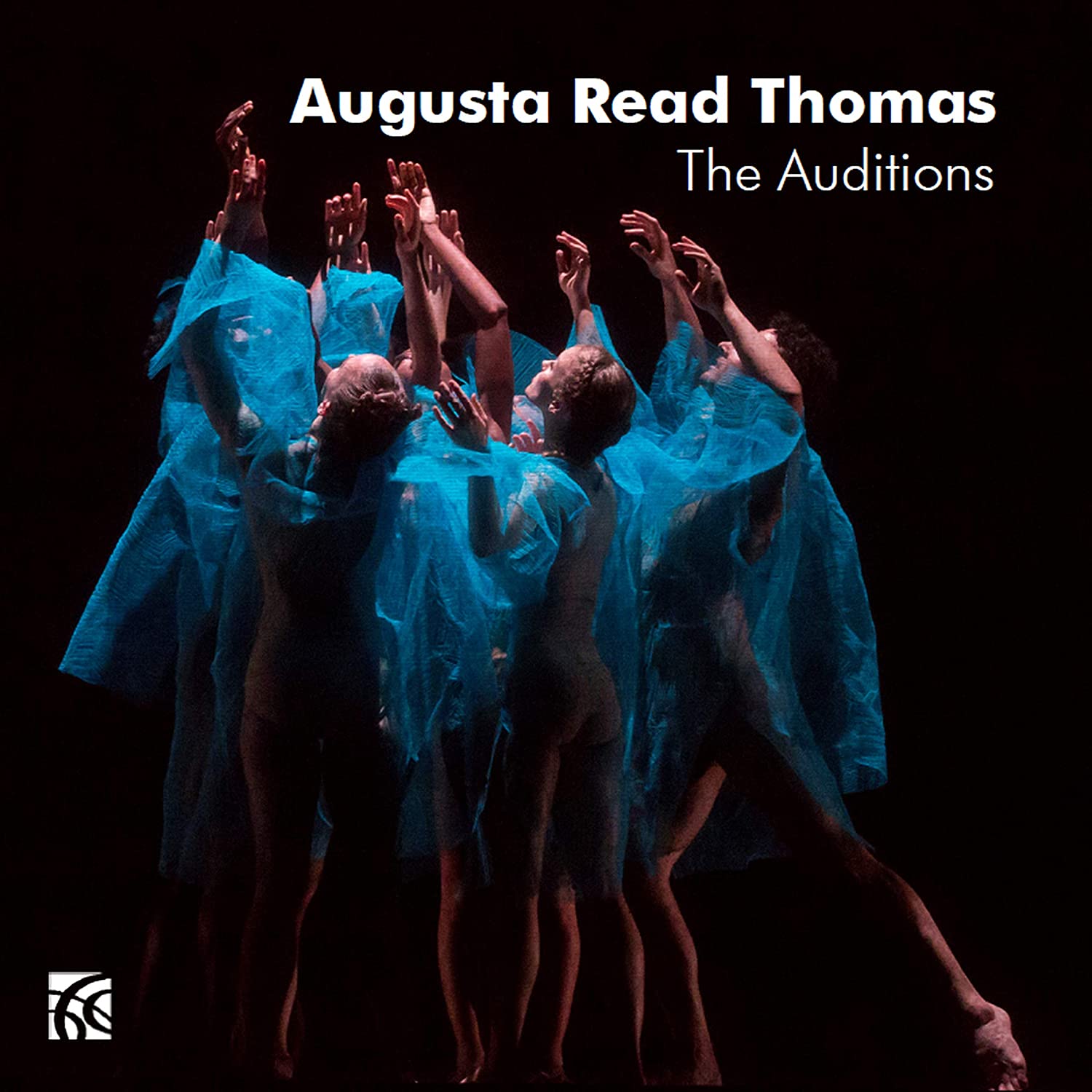 Version of this work for 4 percussion and 9 woodwinds is available on
Augusta Read Thomas: The Auditions

Co-commissioned by the Tanglewood Music Center in honor of its 75th Anniversary Season, with generous support from Deborah and Philip Edmundson; and by Miller Theatre at Columbia University; and by Third Coast Percussion with the generous support of Sidney K. Robinson.

In Greek mythology, Selene, goddess of the moon, drives her moon chariot across the heavens.
She is the daughter of the Titans Hyperion and Theia, and sister of the sun-god Helios, and Eos, goddess of the dawn.

In Selene (Moon Chariot Rituals), a string quartet is joined by a percussion quartet, and the combination of these two quite different instrumental families results in one of the most strikingly distinctive soundworlds to be encountered in Thomas' output. For one thing, the two quartets are seldom used separately, and solo breaks from either strings or percussion, while present, are conspicuous by their rarity. Instead, Thomas prefers to use the 8 players as a compact instrumental unit whose colours, texture and complexion changes constantly as the music gambols through its 17-minute span: this is one of Thomas' most concentrated essays in forward motion, with the pace almost always at a run. There are a few pockets of introspection, but they are too brief to ever dispel the sense of vast spaces covered in the blink of an eye as Selene, the lunar goddess of Greek mythology, would do when driving her moon chariot across the firmaments. With its powerfully driven rhythmic through-line, one cannot be unaware of the work's incipiently balletic connotations - a notion that was confirmed in conversation with Thomas herself: composing for her is as physical an action as it is for the performer to play the music in question, and in the wild hockets that the music crystallises into in its concluding stages, the feeling that the journey is about to reach a point of arrival is as exhilarating as it is inescapable. Typically for Thomas, though, when the music does attain its goal, it's not in the shape of some grand apotheosis, but a single sharp, terse flash.

Vibraphone (motor speeds are indicated in the score and part)
Tubular Chimes Please use the most “in-tune” set of chimes possible. The tubular chimes are shared with Percussion 1.
Marimba (5 octave needed) Only played briefly (share the instrument of Percussion 1).
2 Triangles (small and medium) Every attack is “l.v. molto” for the entire composition.
3 Claves Very resonant. Due to quick shifts between instruments, one clave should be mounted so that it can be played with a mallet; the other 2 played in standard manner.
2 Bongo Drums (fairly moderate in pitch, i.e.: moderately tight skins - these should be lower in pitch than the bongos of Percussion 3)
NOTE FOR PERCUSSION 3: Glockenspiel should be near the Vibraphone.

Xylophone
Crotales (2 complete octaves) Every note is “l.v. molto” for the entire composition. (3 brass mallets needed)
3 resonant Suspended Finger Cymbals (small, medium, large) (not tinny!) Please seek a sonic “cousin” to the triangles’ sounds as well as the crotales’ sounds. Every attack is “l.v. molto” for the entire composition.
4 Temple Blocks (not tinny or plastic sounding - these should blend in as a sonic “cousin” to the wood blocks)
2 Conga Drums (lower in pitch than the bongos)
Suspended Cymbal which is very high in pitch and has high overtones that are radiant and bright.
NOTE FOR PERCUSSION 4: Conga drums should be near the Xylophone.

The score calls for six triangles in the percussion parts.  Care should be given to insure that each has a slightly different “pitch and color” from the others, so that each of them has a unique contribution to the overall sonic palette and so they blend elegantly with the crotales, glockenspiel, and finger cymbals.

Unless otherwise specified above or on the score, use most common beater or mallet.

Please use the most “in-tune” set of percussion instruments.

To purchase a map of SELENE, please visit the Online Store.

Daniel J. Kushner, Rochester City Newspaper "The music was decidedly visceral. With a versatile palette of colors ranging from metallic shimmers to woody strikes, the melodic percussion - including two vibraphones, one xylophone, and one marimba -possessed an intrinsic restlessness that drove the momentum. ...an element of magic seemed to permeate."

Gayle Williams, Herald Tribune Sarasota Florida "Augusta Read Thomas imaginatively combined the forces of the standard string quartet with four percussionists in her Selene — Moon Chariot Rituals (2015) and opened the door to an ever-evolving wheel of fascinating sounds and rhythms. The string quartet of Bennet and Chris Takeda, violins; Steve Larai, viola; and Christeson, cello; at times used percussive techniques (e.g., pizzicato, col legno) sounding akin to the many instruments employed by the percussionists John Shaw, Budish, Nickson and Truesdell.
Always on the move, the music danced in around and intertwined the two quartets like a double helix. The vast variety of notable moments kept me on the edge of my seat until the music ended a single dazzling flash."

John von Rhein, The Chicago Tribune "The impetus of dance is never far from the surface of this exhilarating score, which melds the complementary natures of a percussion quartet and a string quartet to produce a study in inexorable rhythmic dynamism. One of Gusty Thomas' most inventive creations, it drew a supercharged performance from the combined forces of Third Coast and Spektral."

Brian Schuth, The Boston Music Intelligencer "Augusta Read Thomas' Selene – Moon Chariot Rituals, one of the many TCM commissions was written for percussion quartet combined with string quartet. For a relatively young composer, Thomas has already a long and successful career. She was in residence with the Chicago Symphony for ten years, and has a substantial discography. Rhythmic liveliness and an improvisatorial quality characterize her style, and Selene impressively employed both characteristics, along with an idiosyncratic sense of tone color. Arriving halfway into a Festival already characterized by many pieces that use percussion and which have experimented with tone color, Selene is distinctive in the way it attempts to blend strings and percussion.  The music itself is joyful and active.  The ensemble (Annie Kuan-Yu Chen and Jeongmin Lee, violins; Erica Schwartz, viola; Francesca McNeeley, cello; Robert O'Brien, Brian Maloney, Kirk Etheridge and Andrew Johnson, percussion) played the elaborately detailed and technically demanding composition with intense focus and concentration. Conductor Marzena Daikun did admirable work keeping the many virtuosic parts together."

Corinna da Fonseca-Wollheim, The New York Times "Fluidity is a quality in much of Ms. Thomas's work, even as it retains the uncompromising angularity of modernism. Much of that has to do with her unerring ear for tone color and the ever-changing timbres she creates, which pull the listener along as surely as a traditional harmonic progression."

"Selene [is] a work alive with dance rhythms and vibrant colors that included both moments of painterly delicacy and comical touches. An ambitious piece taking in a wide range of moods and sonic landscapes, it received a premiere so persuasive and well balanced as to make a case for the percussion-string octet as a new standard form."

"...according to statistics released last year by ASCAP, a performing rights organization, Ms. Thomas topped their list of most frequently performed living composers in 2013-14."

Oberon's Grove "Third Coast Percussion joined the JACK Quartet for the world premiere of Selene; this double quartet is a Miller Theatre co-commission. Named for the mythical goddess of the moon, this intriguing merging of sound worlds was rich in textures and pulsing rhythmic patterns. The audience reaction was massively favorable: the musicians re-called, and the composer joining them onstage."

Lloyd Schwartz, The Berkshire Review for the Arts "That concert also included one of the most sheerly gorgeous audio experiences of the entire festival: August Read Thomas's mysteriously titled Selene – Moon Chariot Rituals (Selene is the moon's charioteer), another commission. Scored for the interplay of string quartet and percussion quartet, in which, for example, tapping bows imitate the percussion."

If you would like to play a shorter version of SELENE, this cut is optional and renders a 14-minute version.

We are going from tempo 92 in measure 319 and then get to tempo 86 at measure 446. Thus, the tempo change is subtle but we should still make it happen. Thanks!

7 of the 8 musicians have rests, so this cut should not present any page turn problems.

VIOLIN 2 will need a photocopy of a page of music from their part, which sits loose-sleeve on their stand to use at the seam.