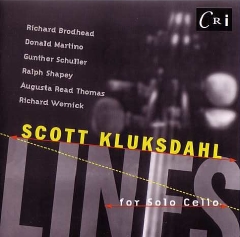 This work is available on
Lines for Solo Cello.

This score is dedicated with admiration and gratitude to Scott Kluksdahl, who premiered it in Weill Hall, New York City on April 29, 1995, and is an homage to the lyrical, expressive, sensitive, eloquent, and poetic qualities of his playing.

Spring Song for solo cello, composed in 1995, is one of the earliest works by Augusta Read Thomas which has not been withdrawn by the composer. It also represents a snap shot into Augusta's long love affair with the cello, an instrument for which she has composed many works (some withdrawn, others published by G. Schirmer) including: Vigil for cello and chamber orchestra, Ritual Incantation for cello and chamber orchestra, Bells Ring Summer for solo cello, Blizzard in Paradise for 8 cellos, Rumi Settings for cello and violin, among others.

Spring Song, composed at the request of Scott Kluksdahl and recorded by him on Albany Records, is a short, five-minute, piece which celebrates the lyrical, long line, expressive, and elegant characteristics of the instrument. The double stop passages remind one of a carillon of bells, all ringing in a flurry, atop a large cathedral. At times the piece is very intimate, and other times bold and energized. Much of the piece is in the high register, so that when it finally falls down to the low C string, one feels as if one has landed back on the earth, if only for a while.